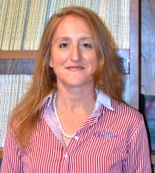 University of Mississippi
Department of Mathematics

Assistant Dean of Professional Development & Communication in the Graduate School, and Professor of Mathematics, working in the area of Commutative Algebra. Ph.D earned at the University of Illinois at Urbana-Champaign in 2003, advised by Phillip Griffith. Post-doctoral position at the University of Utah from 2003-2006, mentored by Paul Roberts. Served as a program director at the National Science Foundation from 2020 to 2022. Curriculum vita

Automation of the Hilbert-Kunz multiplicity and F-signature calculation for intersection algebras, with G. Johnson*. Software files: hilbert-kunz-and-f-sig.zip Software Instructions: directions for use

I have long been interested in the teaching of mathematics.  As a former high school teacher and teaching assistant, I have taught a variety of courses, using several different instructional methods.  As a Visiting Assistant Professor at the University of Nebraska-Lincoln during the summer of 2007, I team taught an Algebra course for incoming graduate students based on a publication in Communications in Algebra. At Seattle University, I implemented the WeBWorK homework system, which I learned how to use at the University of Utah. As a graduate student at the I worked as a Research Assistant, in the area of secondary mathematics teacher education, with Professors Susan Tolman and John Sullivan.  Their project, a cooperation between the Mathematics and Education departments at the University and , sought to improve teacher preparation.  At the , I was an active participant in the Math Circle program for high school students, directed by Peter Trapa.  Moreover, I have worked with REU students through the VIGRE grant.  Some of my old course experience is listed in the table below.  An brief summary of my educational experience, is available in this teaching vita.